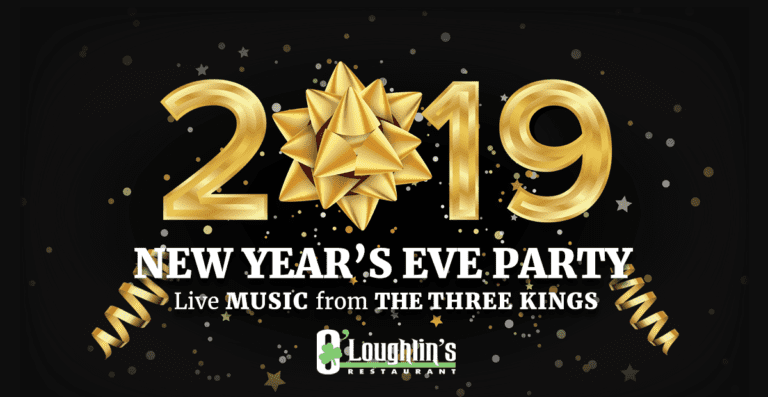 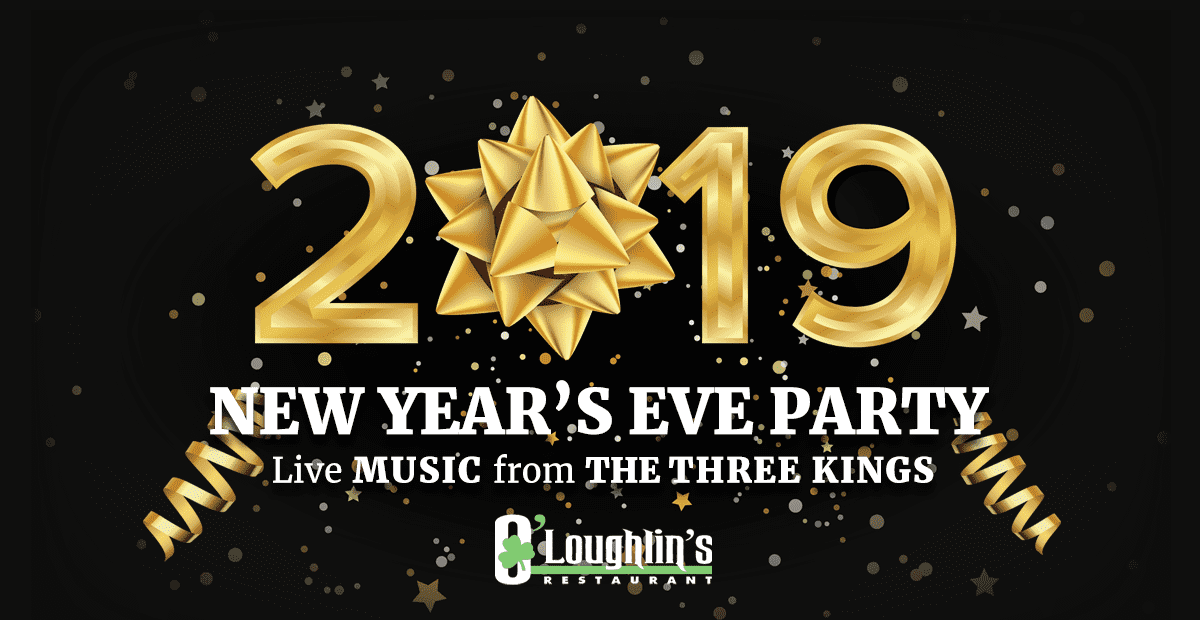 Celebrate the New Year at O’Loughlin’s! Enjoy Great Food, Live Music by The Three Kings, and a Premium Open Bar!
A champagne toast at midnight and a lot of party favors!

Proper attire required. After midnight, it is a cash bar, the last call is at 1:30 am.
Have a Happy New Year!

New Year’s Traditions Around the World

What are you doing New Year’s Eve? This is one of the most asked questions among family, friends, and acquaintances around the holidays. The evening is quite magical. So much so that many movies, songs, books, and poems have been written about it. What are some of your New Year’s Traditions? It may surprise you how some cultures around the world celebrate with customs that they believe could bring good fortune and health for the coming year. Check out some of these New Year’s Traditions around the world, and you may add some new rituals as you ring in this New Year!

England
The custom for welcoming New Year is full of hospitality and comfort. Many believe that their first guest for the year brings them fortune. The ancient belief is that he should be a dark haired male, should enter through the front door and exit through the back. He needs to bear traditional gifts like a loaf of bread for the kitchen, whiskey for the head of the family, and coal to light the fire. These items are to bring good luck throughout the year.

Denmark
The Danish peoples have a tradition of jumping and smashing in the New Year. As the clock is just about strikes midnight, folks climb and stand on chairs or the sofa. Once the clock strikes midnight, they “jump into the new year.” Another custom is to collect and keep any broken dishes throughout the year. On New Year’s Eve, you then smash your dishes at the doorstep of a good friend. The more dishes piled on someone’s stoop at the end of the night is evidence of how loved they are.

China
The Chines have a unique way of preparing for the New Year. Every front door is painted red which symbolizes happiness and good fortune. They also hide all the knives for the day so that no one will cut themselves which is believed to sever the family’s potential good luck for the coming year.

Ireland
One of our favorite traditions in Ireland for New Year’s is to bang away bad luck with bread. No, that is not an Irish colloquialism. The Irish literally would walk through their home and bang bread against the walls to ward off evil. Some also feel it would ensure there would be plenty of bread for the coming year.

Brazil
Brazilians traditionally eat lentils on New Years to signify wealth and prosperity. Folks feast on dishes of lentils and rice or lentil soup. Traditionally they wear white on New Years. In Rio de Janeiro there is a sacrificial boat filled with jewelry, candles and flowers pushed into the ocean. The belief is that in doing so, it will bring health, wealth, and happiness for the people of Brazil.

Germany
Lead is considered to be auspicious in Germany. During the New Year, they pour molten lead into cold water to observe the shape, which predicts the future. Figures such as a heart symbolize love and marriage, whereas round shapes denote good luck. An anchor shape may mean that you need help with something, and a cross signifies someone’s sad demise.

Spain
Here it is tradition to eat 12 grapes at midnight on New Year’s Eve for good luck. Traditionally, one grape must be consumed for each strike of the clock.

Latin America
Choosing the right color underwear for New Year’s eve is more symbolic than you might think in Latin America. Each color has a magical meaning. Red underwear is for luck in love. While wearing white hopes to bring a peaceful year. Yellow is by far the favorite choice, as it brings good luck and fortune. Avoid wearing black underwear it is believed to bring you bad luck the rest of the year.

What are some of your New Year’s Traditions? Whatever they may be we believe you should join us at our traditional New Year’s Eve Celebration. Every year, O’Loughlin’s throws one of the best parties in town!Grab you Friends and neighbors and head over to O’s.  Enjoy some magic and create memories you will be talking about for years to come.